Mwrender refactoring is finished. That’s great, since it was required to add any other rendering features, like animations, terrain rendering or particles. And jhooks is working on integrating animations right now!

Well, since jhooks has not much time to work on it we can’t expect so much progress as recently. And animations in 0.12.0 won’t include clothing and armor since we have no proper inventory handling yet. But that does not mean that it won’t be putted on 0.13.0 road map just to save us from jhooks wrath.

Configuration & Packaging is going on too. The most interesting thing is probably data path detection, currently openmw reads it from config file and you need to put it there manually. That sucks and from time to time We have users with “omg! openmw does not work, no data file! HEEEEEEEEEELP!”. That sucks too. ;-)

This is how it looks my rss reader: 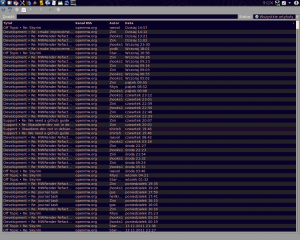 Mwrender all the time. At last the end of this task is near. Than animations + journal and 0.12.0 is coming. It’s safe to say that 0.12.0 will have this two major features.

It supposed to be GUI time but It won’t. Maybe it’s a fault of poor documentation of mygui, maybe lack of support, maybe We done wrong choosing it but it’s not a time to look backward.

Nothing really new or really exiting. Just the same old development in mwrender plus minor improvements (as He defined it) from yacoby “Use alternate storage location for modified object position”.

And I won’t write more since everybody is playing Skyrim right now and have no time to read my news. :(

Very boring week. Most of work is done by jhooks1 in the mwrender, and I start to think that we should find the way to clone jhooks1 to the jhooks2, jhooks3, jhooks4 and maybe jhooks5. 1 is doing mwrender and animations, 2 terrain rendering, 3 GUI, 4 code maintaining, 5 AI and gameplay and HELL WE ARE DONE IN JUST FEW MONTHS. ;-)